I was a graphic designer for most of my life and freelanced since 1986. Prior to becoming a designer I was hired as an accountant’s assistant and they were going to sponsor me to take courses. I spoke to a friend and told her that I wanted to do art instead. She told me to apply to a  publishing company which hired me and this allowed me to learn graphic design and eventually excel.

I am from Winnipeg and moved to Calgary in 1986. I did this to get closer to the mountains as I had been through the area as a child and they were in my dreams. Calgary employed me and I was able to hike and ski in the weekends. 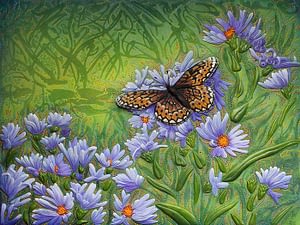 I used to do bas-relief carved and painted art which I displayed and sold at group shows. I stopped because each piece took a month or more. They were semi-realistic and I would research and portray the anatomy in a way that shadows showed the dimensions correctly. This wasn’t the only reason though. I had to wear a mask while carving and would have a vacuum running to collect the particles. Dust was still everywhere in the house. It was unhealthy and eventually became too much. I quit this type of art when we moved into our present house. It took me a while to replace and I tried several types of art over the years since then until now… I love what I am doing now.

I have a Saint Bernard, poodle cross – Saint Ber Doodle – named Harley. We haven’t cut his hair yet and some people think he is a great looking dog. I think he looks funny with his shaggy coat and unruly hair. He is sooo lovable and is a cuddler.

Harley isn’t allowed into the art room. He will sometimes sit outside the studio gate waiting for me to come out.

I am left handed.

My husband’s name is Mark and this March we will have been married for 20 years. Mark proposed to me at Disneyland and the proposal was broadcasted on a local radio station. I had won a trip with the station and was allowed to bring 3 people. Mark planned the proposal with the radio station without telling the other 2 people. You can hear my friend Glenda in the background commenting her disbelief at not knowing… I cried all day in Disneyland… yes, happy tears.

Mark and I once volunteered at a wildlife sancuary in Peru’s Amazon. While getting there we found out about a place called Machu Pichu… My favourite activity while at the sanctuary was walking a young Giant Anteater named Tatianna and helping her find ants, termites and other insects.

Mark and I once travelled from Calgary through the western US to New Mexico and interviewed over 50 people with eco-friendly homes. We met so many wonderful people and learned so much. I had planned to write a book about the experience but the economy tanked and I was unable to finish the project. The blog is still active though. www.yourecofriend.com

Another thing we did was buy and renovate a log home on an acreage outside of Calgary. This was a 2 year project and we eventully sold it but not before we were able to install a solar thermal heating system. This helped to heat the home in the winter and would supply endless hot water. If we could move back there we would.

I have always been fascinated by the small things in nature, imagining myself tiny and lost in a clover forest or next to a wild butterfly. I hike in the spring and summer taking pictures of wild flowers, butterflies and bumblebees. I blow up these photos and  imagine what an ant would see. My art demonstrates this fascination, featuring larger than life florals. I see myself small in the pieces.

I wrote 2 children’s ebooks featuring my European Landseer dog.  There was Baxter and the Butterflies with my wild butterfly photography and Baxter learns to count using my wildflower pictures. Baxter is gone now but he lives on in the books. After Baxter I told Mark no more dogs. That lasted until Harley…

I have attended a Jazzersize class 3 days a week for the last 10 plus years and hate missing a class. Jazzersize is a fitness class combining aerobic exercise and dancing to music. Not only fun but it’s the only fitness class that  has a majority who have been attending for several years, even decades.

I have designed a 3D whole home renovation for our present home on SketchUp.

I am somewhat shy and prefer to be in the background but I am happy when people tell me what they think of when they see my art. It allows me to revisit the art.